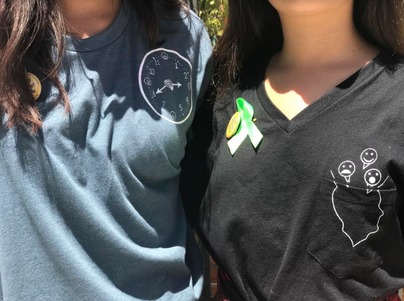 How do these final products show your brain health expertise?

Our goal for our anti-stigma message was to create a shirt that was simple but also spread our message, which was that an adolescent's brain is still developing and that the neuroscience is why we act the way we do. I think at first we were having a lot of trouble with this because we couldn’t come to a consensus for what we actually wanted on the shirt but after one of our critique sessions tat included our teacher, Mrs. Nuvia and Sandra from the UCSD C.A.R.E we were able to redirect our ideas and brainstorm a new idea that we were happy with. Our group was really happy with how our final shirt turned out because of all the challenges we faced and the simplicity of the shirt that still carries a message. During a good chunk of this project I was in charge of our groups little book. The purpose of the little book was to serve almost as a crash course for our audience at the NAMI walk. We covered, stigma in the little book, the basic neuroscience and brain structures behind teen emotions, our sources and more. The process was a bit tricky because at first our group was negative emotions but then we switched over to emotions in general since our first topic was too closely related to the depression group. My group was also able to help me a lot as the NAMI walk got closer by giving me critique and helping me change various things. All in all I received a lot of harsh critique that I am glad to have gotten because it pushed me challenge myself and do my best by continuing my research and finding a way to simply explain my work through the little book. 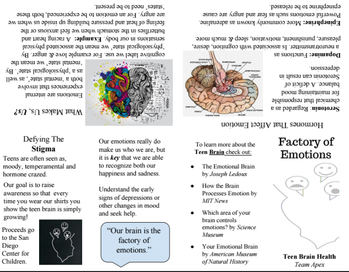 How did the book club help you build your brain health expertise?
Overall I was just able to learn about the reasoning behind one's way of thinking and processing emotions. For example, when the book focuses on the subject of fear. The scenario that the book gives is a car crash, which of course is linked to an emotional and traumatic event. Suppose during the accident you remember various details/stimuli such as the horn honking. The book reads, “The sound of the horn, having become a conditioned fear stimulus, goes straight from the auditory system to the amygdala and implicitly elicits bodily responses that typically occur in situations of danger, such as, muscle tension, changes in blood pressure and heart rate, increased perspiration and so on.” This examples show the direct connection between the brain and the bodily response that follows.
As mentioned in the last paragraph I was also able to learn a lot about the connections between the brain and the body. A really clear example is fear. The book reads, “As we’ve repeatedly seen when the amygdala detects an aversive emotional situation, it turns on all sorts of bodily systems, including the autonomic nervous system.” This sort of connects back to the example I gave earlier with the car crash and triggers. This scenario is well known as the “Flight or Flight” system. In the brain, epinephrine is being released and this sends a message to the adrenal glands which then release adrenaline. My perspective has definitely changed after reading the book. It wasn’t really a story so I was able to learn a lot of the “technical” stuff that goes on in the brain. Now in everyday scenarios I am able to recognize what I am feeling and connect that back to my brain and what is happening at a neurological level which is super cool.