Humans of the South Bay Project

Welcome to the project where we interviewed and recorded people in search for untold stories. 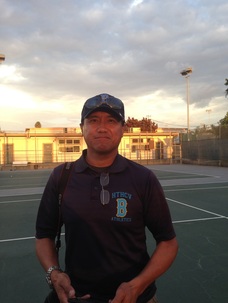 Who is Robert Pe?
Robert is currently High Tech High Chula Vista's Varsity Girl's tennis coach. I first met him during August of last year when the tennis season first began. This is my second year on the team, as we began this project I realized I still didn't know too much about him. That motivated my friend Samantha Soto (also on the tennis team) and I to ask him for an interview in hopes to learn more about his past and his story.
​
Robert worked in San Diego's Sheriff Department for many years. After this he became semi-retired and when asked to Coach for HTHCV he agreed without a doubt knowing he held a passion for tennis all throughout his life.

Samantha and I interviewed Robert at Hilltop's tennis courts right before practice. The story below is taken from the transcript of that interview.

The Story Robert Told Me

The one thing I can tell you for sure is, anybody that goes into law enforcement learns the different reality than what most people see. It gave me the opportunity to help a lot of people but at the same time I can’t count the number of deaths or suicides or domestic violence and drugs that I've seen.

Funny I was asked why I went into law enforcement a long time ago when I was going to college and it was to help people. I mean just plain and simple. Now there under a microscope. I’m kind of glad I’m not in the business anymore because they're being judged by the media before a lot of things are brought to court or proven true or false. I think a lot of it people portray like what they see in the movies and T.V. and that really is not reality.

The case that really sticks out was a suicide. It was a really tragic story of this man and woman. They had a couple kids and there was an ongoing domestic violence for years. I would say easily three or four years. At one point when the wife decided that she had enough and that she was going to take the kids and leave, he didn’t believe her and when she finally made the decision to do it he ended up hanging himself in the garage. I was the first one on the scene and it was just really sad to see that people have to resort to something like that. It was a very dysfunctional family.

​           Along the way I have learned many lessons. More than I can tell you. The biggest lesson goes in both black and white. Black showing how people can be so cruel to each other and on the other side it can show how people can be so caring and giving without it being monetary or no hidden agenda behind it. It expands the whole gamut of good and bad.


Humans of the South Bay Project Summary:
In this project we chose we wanted to interview in order to hear there story. Once we had someone we made sure to record their interview and asked questions based on what we wanted to know about. Next we made things like a interview outline, script outline, transcript and more. After this we chose a line from the whole interview and displayed it alongside their photo.

Why did we do it?
This project was meant for us to be able to hear our communities story. A lot of times only rich and powerful people are associated with having amazing stories but throughout this project I learned that that stereotype isn't true. In this project we also enhanced our writing skills through our various, interview, script and transcript outlines. We also learned to become analytical thinkers and more.

Who did you decide to interview?
I decided to interview my tennis coach, Robert Pe. Like I mentioned above I've know him for a little over a year and as we began this project I realized I didn't know too much about him or his past.

How did you come up with questions?
Before writing my questions I remember my coach mentioning once that he used to work in San Diego's police department so immediately I knew that's what I wanted to focus on. Here are some of the questions we asked during the interview.
- I know you worked at the Sheriff's Department, how has that changed your life? How has your perspective changed?
-How did working in law enforcement change you?
-What made you want to go into law enforcement?
-During that time was there any valuable lessons you learned?
Of course there were many other questions but these were some that were included in the interview.

What was it like watching Storycorps and the good/bad model interviews? How did this help you?
Watching the Storycorps interviews helped me get a good idea of what our interviews were supposed to look like. It was a good first example and it was a good reference point. My favorite model interview was when Lisel and Dr. P did the, "Yes, and..." activity. When I tried it out it really forced me in a positive way to be able to quickly come up with both follow up questions and answers. As for the good and bad model interview, those did help a little but they were a little generic and showed obvious "don't do's" like being on your phone, turning the other way, etc. I would have liked something more specific.

How much background research did you do and what did this do for the interview?
Like I mentioned before I already knew where I was going to direct my questions and that topic focused around law enforcement. I decided to do the first part of my research on gang culture where I learned many different facts and the reality of the situation and how big it is. The second part of my research focused on gun violence, something that has personally impacted his life. Of course you can show up at the interview super prepared but you never know where the interview is going to end up going so it's good to have a little bit of background information on a general area.

Description on the interview:
Where did the interview happen?
My friend Samantha Soto and I decided to interview him on Hilltop's tennis courts before practice.
How did you record it?
We recorded on Samantha's Iphone 6.
At what points did it feel awkward?
It honestly didn't feel awkward throughout any point of the interview. He was really open and comfortable.
At what points did it feel natural?
When he was telling us one of his personal experiences while working in law enforcement.

Interview Outline:
This was out first interview outline where we copied our whole interview word by word.

Script Outline:
This is my script outline. Here we copied everything from the interview outline that we wanted to use in our final transcript.

Script
This is my final script based on my interview with my tennis coach, Robert Pe.

Copy paste this link into your URL to see the Humans of the South Bay Student Interviews Page!
http://humansofthesouthbay.weebly.com/

Reflection:
​I chose to interview my tennis coach Robert Pe. This is my second year on High Tech High Chula Vista's girls varsity tennis team and as we began this project I realized I still didn't know too much about him. That motivated my friend, Samantha Soto and I to ask him for an interview in hopes to learn more about his past and his story. I learned a lot about his past in law enforcement. It's something he had only mentioned once before but it was nice to hear about his past and what he did before coaching. I think he felt fine and comfortable. Like I mentioned before he was really open to talking about anything we wanted to know about. If I were to interview anyone again it would be my mom because of course I know about her but I feel like I could still know more. If their is another opportunity to interview her i'll definitely take it.