The Power Within Introduction:

The Power Within is a collaborative project between High Tech High Chula Vista and the non-profit arts collective So Say We All. Our goal in this project was to answer the projects leading question, "Where does our power come from?" This was no easy task. Our assignment was a seven page narrative that portrayed where our strength came from. Students had to make sure we were digging deep enough and showing true emotional honesty, some of us even complettly restarted our story half way through the project! Our exhibition was held at The Industry alongside a slideshow of images that represented our story. We also presented our beautiful paintings that represented one of the human systems and our power.
Drafts:

Download File
Drafting Process:
The drafting process was definitetly a long one. We began by filling out a graphic organizing with several story ideas on what was important to us. Our first page requirment was three. I began by doing my best to get everything down on paper. This was personally challenging for me because I always want my work to be perfect but I had to let that go. Another challenge was getting myself into a position where I was being emotionally honest. I sort of had to ease into it because talking about how I felt during that time was something I never really wanted to share with other people. Little by little and as I began hearing other people's stories this really encouraged me to do the same with my story and it's so much better because of it.

During my next couple of drafts I learned how to "show" and not "tell". This means instead of just telling what happened it was better to explain the moment, where you were, your surroundings and how you felt in that exact moment. This really helped improve the quality of my story and allowed the audience to really put themselves into my story and have a better image of what was happening. Even during our scripting process we were still making little changes that helped our story and that really shows that a story is never reallly perfect or finished. 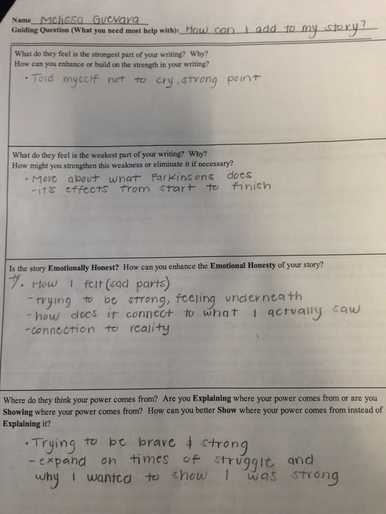 The critique process was a huge part of this project and our stories would definitly not have been the same without it. It pushed us to expand on certain thoughts and ideas, to add more detail/"show" not "tell" as well as various other things. I was really thankful for it, especially because a lot of the feedback I revieved allowed me to improve my story so much. The first couple drafts we would read our story and just go in a circle responding to a series of questions. I did like this but felt like I could have still gotten deeper crtique. It was a bit surface area.

Our third draft critique was definitly a lot different and much more time taking. It was close to half an hour per person. We started off my reading our story and then moved on to clarifying questions where the writer was not allowed to speak. Next was the discussion question. Here the group would answer the questions on the graphic organizer while the writer made sure to take notes for future improvement. Last but not least was the response followed by a debrief. I personally really liked this critique method because there was so much information given and it really have me so many new ideas that I could implement into my story. The only downside was how long the whole process took.

Towards the end of the drafting process we began to script. This meant organzing our story into a way where we would be reading directly off of it. Something really helpful was having guest speakers come in and give us examples of how we could do this ourselves. Some scripting including adding paragraph spaces in order to take a pause or slow down, bolding a word when we wanted to really enunciate it, italics for reading a word slowly and much more. This really helped me when practicing my story and allowed the audience to stay engaged throughout the whole performance.

Since this was something I had never done before at first it was little difficult because I didn't know where I wanted these cues and I wasn't sure what would work best for me. It really was just trial and error. I tried a couple of things out with my first draft and later I went back and changed things up in order to make it really work. Overall scripting really taught me how to make my performance a strong one and look forward to doing the same in the future. 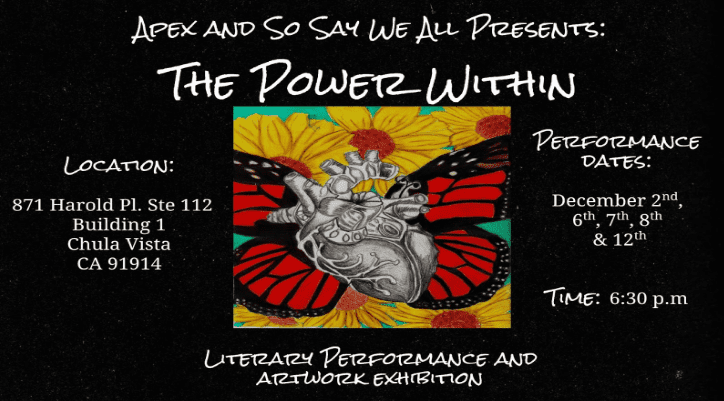